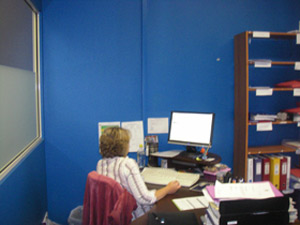 We have entered Cheryl into the WA Business Woman of the Year category to recognise her leadership, drive, enthusiasm and longevity in the very competitive and ever changing financial services and education and training sectors.

Background – Cheryl commenced as a bookkeeper in 1999 when her previous life working as a deck hand on a fishing boat in far north WA was hampered by her young son crawling around the boat! What does a mother with young children do to earn money and keep her brain active?

Her brother in law at the time suggested she take a look at MYOB accounting software and get into the bookkeeping and accounts field. The family moved to a house and a new career in Perth. With a natural talent for numbers and organisation Cheryl quickly decided that she would set up a partnership with another young Mum and take on bookkeeping as a career.

Self taught in MYOB and bookkeeping Cheryl realised that there was a big knowledge gap for business owners and bookkeepers alike and started to actively campaign for a Certificate IV in Bookkeeping to be introduced into the VET system. Cheryl worked alongside the Bookkeeping Institute of Australia (BIAU) in Queensland and the Institute of Certified Bookkeepers (ICB) in Victoria. All communication was phone, email and the odd interstate visit. The course came into effect in the VET system in 2002. Baby number two arrived during this period.

Cheryl was the first person in Australia to undertake and pass the national recognised Certificate IV in Bookkeeping. Cheryl was adamant that bookkeeping was a career in its own right and began classroom training for the BIAU here in Perth as a contracted trainer along with short courses for small business owners and accounts staff. Meanwhile the bookkeeping division was growing with Cheryl and the training staff spotting the potential new consultants and bookkeepers from the Certificate IV graduates.

Cheryl became an accredited MYOB Partner and was the first MYOB training Centre in Perth in 2005. The courses developed and grew with the WiseClick training division still contracting as trainers for other RTO’s delivering the Certificate IV in Bookkeeping qualification. By this time her talent for sales and consulting to small business meant that students who attended the courses began booking one on one consultations for assistance with tidying up and sorting out their business books. MYOB consulting was growing and more consultants were hired to share the load. During this time Cheryl divorced and still managed to grow the business whilst raising two young children.

When the Tax Practitioners Board undertook the BAS Agent Registration Legislation draft they invited Cheryl to be an advisor to the board. We are sure that without that input all BAS Agents would have had to be employed by an accountant with no pathway for new bookkeepers to attain the title of BAS Agent.

The ICB recognised her achievements to the bookkeeping industry by making her a “Fellow” of the ICB in 2012.

Achievements in 2014 – 2016
2014 – Marriage! A personal achievement that you may not want to consider for the small business categories but certainly made Cheryl very happy!
Cheryl married Wayne Triplett in March 2014 and all staff attended the wedding on the beach in Fremantle. Wayne has since become a valued member of staff and looks after staff and client relations.

2015 – Doubling the National Pass rate for Certificate IV in Bookkeeping Students
In late December 2014 WiseClick Training became its own RTO with courses and assessments designed by Cheryl and her staff to give the most practical and specific training available to bookkeepers, accounts staff and business owner alike. WiseClick courses were delivered from January 2015 and by the end of the first 12 months students graduating from WiseClick had doubled the national pass rate for Certificate IV students. This is seen as a huge achievement by Cheryl and this result has continued into 2016.
The WiseClick Certificate IV point of difference is the training calendar structure and dedication in having the student complete. The students attend the classes then sit the scheduled assessment days. This means that the students learn to cope with deadlines and have the satisfaction of passing the units of study throughout the course. When life outside of the classroom becomes stressful we can reschedule classes and give alternatives to keep students on track to complete. We don’t want them just to enroll – we want them to finish as well!

2015 – Gold Xero Partner
Cheryl was keen to move the business alongside the introduction and growth of the online Xero accounting software by including the software in the training rooms. Using the latest technology available has always been a priority for Cheryl to maximize time and cost savings for her bookkeeping and consulting clients. WiseClick became a Xero Accredited Training partner in WA in 2015 plus we also achieved Xero Gold Partner status during 2015.
The Xero assessments were the first to be implemented in Perth for the Certificate IV in Bookkeeping qualification and have become another point of difference in the highly competitive private education and training sector. All assessments and specialist training manuals were written by Cheryl based on her experience and knowledge.

2016 – Merging with Carbon Group
Working an average of 60 plus hours a week for many years building the business plus managing a new husband and teenage children Cheryl needed to look at how she could take some well earned time off. 2016 was the year to focus on taking more time away from work. Fridays marked as “At Home” in the calendar became noticeable and all staff try very hard not to contact her on a Friday!

When Cheryl was approached by Jamie from Carbon Group Accountants to consider a partnership it was perfect timing. Being able to share the management and workload, learning new management skills and strategies plus giving her staff opportunities to progress their careers was particularly inviting. What a great compliment for all her effort over the years.

Cheryl announced the partnership with the Carbon Group to our clients on the 1st September 2016.

We look forward to the next chapter in the WiseClick/Carbon Group Balcatta story and staff will be attending the 2016 Belmont Small Business Awards presentation night on Cheryl’s behalf.  We will let you know how we get on in the next newsletter!